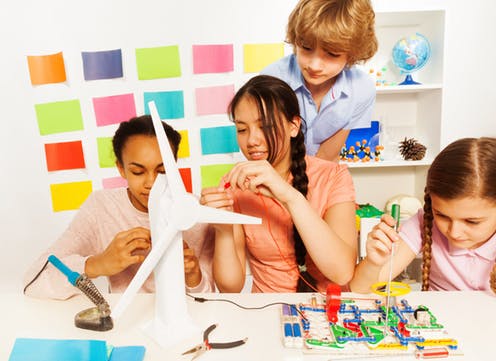 The growth of Science, Technology, Engineering and Math (STEM) education highlights the need for our youth to acquire technical knowledge and skills to enter a rapidly evolving workforce. However, conversations about STEM usually do not include discussions regarding the cultivation of character virtues.

In this post, we explore the impending skills gap facing the U.S. economy, discuss the role of STEM education (specifically robotics) in early childhood education, and make the case for leveraging educational robotics to promote positive youth developemnt and develop social-emotional learning competencies.

For the past decade, a strong push to promote K-12 education in STEM subjects has gained significant footing internationally. As of the writing of this report, 16 countries in Europe and the Middle East have integrated coding into curriculums at the national, regional, or local level, including: Austria, Bulgaria, the Czech Republic, Denmark, Estonia, France, Hungary, Ireland, Israel, Lithuania, Malta, Spain, Poland, Portugal, Slovakia, and the United Kingdom. Outside of Europe, countries such as Australia and Singapore have also established clear policies and frameworks for introducing technology and computer programming in K-12 education. Mexico recently piloted a computer science education week that increased participation in the subject and generated interest in programming among students, and Argentina’s One Laptop per Child program has boasted strong results pointing to the impact of laptop availability on school readiness and other learning outcomes.

Surprisingly, the United States actually lags behind when compared with these other nations. Only one in four schools are teaching computer science, and just 32 states allow computer science courses to count towards high school graduation. (Of those states, only seven currently have computer science curriculum standards in grades K-12, per Code.org.)

According to Code.org, the nonprofit that encourages schools nationwide to adopt programming curricula and promote broad participation in computer science, 71% of all new jobs in STEM are in computing. However, only 8% of STEM graduates are in Computer Science. This discrepancy highlights the importance of starting early: the workforce needs coders. And this need is only growing: the U.S. Bureau of Labor Statistics predicts that employment of computer and information technology occupations will grow 12% from 2014 to 2024. This increase represents the fastest average for all occupations, projected to add about 488,500 new jobs in the 20-year span.

From Sesame Workshop to the International Society for Technology in Education to the Fred Rogers Center for Early Learning to the U.S. Department of Education, influential institutions are creating research and policy changes that have spurred a newfound focus to the role of technology in early childhood education. Early childhood is an important time for young children to grow, play, and explore the world they live in. Research shows that — from both an economic and developmental standpoint — educational interventions that begin in early childhood are associated with lower costs and more durable effects than interventions that begin later on.

Children as young as Kindergarteners (aged four- to six- years old) are particularly positioned to be positively impacted by STEM educators. Developmentally, this stage in life is characterized by genuine curiosity and desire for learning. In order for young children to master new knowledge about the world, they need hands-on experiences (see: Piaget). By building on their natural inclination to design and build things, and to take things apart to see how they work, it is possible to introduce powerful concepts and skills in computer science, engineering and robotics. New technologies, such as educational robotics, offer children a hands-on way to learn about the “smart” objects they encounter every day.

What is unique to our human-made world today is the fusion of electronics with mechanical structures to make these “smart objects”. We go to the bathroom to wash our hands, and the faucets “know” when to start dispensing water. The elevator “knows” when someone’s little hands are in between the doors and shouldn’t close. Our cell phones “know” how to take pictures, send emails, and behave as alarm clocks. Even our cars “know” where we want to go and can take us there without getting lost. We live in a world in which bits and atoms are increasingly integrated. All of this has led to a growth in the field of educational robotics.

Why focus on character development in early childood education?

Building on Piaget’s early work, we can claim that development emerges from action; that is to say, individuals construct their knowledge of the world as a result of interactions with the environment. For example, they construct knowledge about technology by engaging in coding and robotics and they develop character virtues, by participating in experiences that provide them with opportunities to experiment with different ways of being and behaving. Piaget’s perspective is directly relevant to contemporary theories of moral development characterized by a developmental process that involves personal struggles to arrive at fair solutions. At the same time, it provides a bridge with Papert’s Constructionism, which also focuses on learning by doing within a community context.

Lawrence Kohlberg extended Piaget’s work in the domain of moral education. Although Kohlberg was most well-known for his psychological stages of moral development, he also proposed the Just Community model of moral education which brings equality, values, and justice to students and educators. Kohlberg understood moral development to be the result of an increasing ability to perceive and integrate social experience through taking diverse roles and encountering different perspectives within a group. This approach proposes that involvement in social institutions, in which there is group decision-making and self-government, is critical in shaping the individual’s moral development. Although the assumption behind this approach, as well as that of Piaget, is that there is a universal progression from a concrete to an abstract way of thinking about moral issues, it provides the foundation for developing educational programs that place the individual child’s learning in context.

Marina Umaschi Bers, a leading researcher at Tufts University, is at the forefront of a push for robotics to advance both STEM education and SEL curriculum. In her view, robotics is an ideal tool for early childhood education because it facilitates cognitive as well as fine motor and social development. It engages children creatively, as an expressive medium, while developing technical skills and a curious mindset. Unlike many apps and computer games, robotics activities do not involve sitting alone in front of a screen, but do facilitate active movement, team work, collaboration and creative problem solving.

When learning to build and program robots, young children are also engaging in a type of problem solving and analysis called computational thinking. The term “computational thinking” can be defined as solving problems algorithmically and developing technological fluency. While computational thinking is rooted in computer science, many have argued that it is a universally applicable attitude and skillset that is fundamental for everyone to master, just like reading, writing, and arithmetic. It is a literacy of the twenty-first century. Furthermore, as children learn how to program, they can also develop their creative side within a peer community to grow a society of innovation.

Previous studies show that children as young as four years old can learn foundational computational thinking concepts and this kind of learning can support their literacy, mathematical, and social and emotional socio-emotional development. As Bers has shown, when computational thinking is developed in the context of programming robots with a playful approach, it becomes developmentally appropriate for early childhood education.

Research shows that introducing this work in early childhood might help to avoid stereotypes and other impediments to entering the innovation pipeline later on. This benefit is even more important when trying to involve minorities, females and underrepresented groups in the technical fields. However, learning to code does not just expand a child’s career options in the future. Through coding, young children learn to comprehend and manipulate the digital landscape in which they live by thinking through “powerful ideas,” a concept coined by Seymour Papert, as fundamental in his theory of Constructionism.

Constructionism proposes that technologies (including computers as well as tangible manipulatives such as robotics) are powerful for educational purposes when used to support the design, construction and programming of personally and epistemologically meaningful projects. When programming, children work through powerful ideas of computer science and engineering, and engage in self-expression. Children explore how to communicate through a range of new media, how to test and refine designs, and learn to problem-solve using multiple strategies. Studies have shown that the process of designing and debugging computer programs also engages children in metacognitive activities.

Ultimately, despite their respective independence, the fields of STEM and SEL have both been gaining significant traction the past several years. However, the marriage of these two emerging areas of research and practice represents a major opportunity for innovation. New programs, studies and grants that promote character virtues such as generosity, collaboration, creativity, and curiosity through STEM curriculum have the potential to impact our youth at an entirely new level.

I’m incredibly excited to announce that I will be helping to lead a project with Professor Bers’ DevTech Research Group that will explore whether a robotics curriculum (that makes coding and computer science developmentally appropriate for young children) can not only promote the acquisition of important technology skills but also help children become better citizens and human beings. Focusing on Sir John Templeton’s three character virtues considered crucial for purposeful living — generosity, curiosity, and creativity — the project will be conducted in faith-based and secular elementary schools in the United States and Argentina. For updates and findings, follow me on Twitter.

1 thought on “The Case for Integrating STEM and SEL Education”

Inside SEL is a blog and monthly email newsletter focused on curating and sharing relevant articles, policy updates, research, and resources from the field of social and emotional learning (SEL).